Bari is the capital city of the Apulia Region. It is on the Eastern coast of Italy, on the Adriatic sea. About 320,000 people live in the Bari municipality and about 1.2 million in the metropolitan area. Bari is a very active city, full of students thanks to its universities. The medieval Old Town is very characteristic, with the well known Saint Nicholas Basilica built during 11th century where the remains of Saint Nicholas are preserved. Today Bari is a modern city, visited by many people from all over the world, with a beautiful seaside on its North-Eastern side, and beaches even at walking distance from the city center.

Another important monument is the Norman-Swabian Castle, built by the Normans in the 12th century and restored by Frederick II around 1230. A buildings worth a visit is the lyric theather Petruzzelli, one of the most famous in Italy. Interesting museums are the Archaeological Museum, the Provincial picture gallery, the Civic History museum and the Botanical Gardens Institute. Important events include the festivities of Saint Nicholas, the patron saint of the town, between the 7th and 9th of May, and the exhibitions at the Fiera del Levante fair on the second week of September. 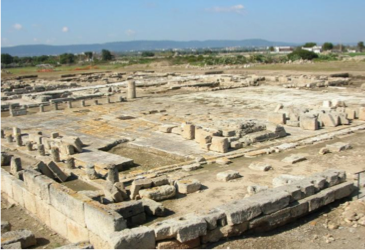 Gnatia (also Egnatia or Ignatia in Greek) was an ancient city of the Messapi, and their frontier town towards the Salentini. It is located near the modern Fasano.
The first settlement known in the place dates from the Bronze Age (15th century B.C.). In the 11th century B.C. it was invaded by the Iapyges, while the Messapic era of the town (as well as for the whole Salento) began in the 8th century B.C., to end in the 3rd century B.C., with the Roman conquest. 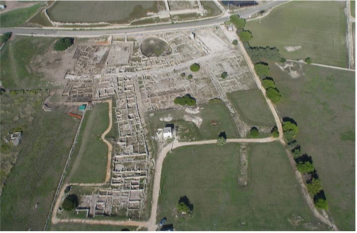 Under the Romans, it was of importance for its trade, lying as it did on the sea, at the point where the Via Traiana joined the coast road, 50 km south-east of Bari.
An Episcopal see in the Palaeo-Christian era, the city was probably abandoned in the High Middle Ages due to the spread of malaria in the area, or to Vandal and Saracen attacks.
The ancient city walls have been almost entirely destroyed in recent times to provide building material, and the place is famous for the discoveries made in its tombs. A considerable collection of antiquities from Gnatia is preserved at Fasano, though the best are in the museum at Bari.

An important cultural centre in Salento, Ostuni is also known as the “white city” and it is located eight kilometers from the Adriatic coast, in the southern Murgia. The first settlement dates back to the 4th century B.C. and was established by the Messapi. Destroyed at the end of the Second Punic War, the town was rebuilt by the Romans under whom Ostuni flourished. A long period of alternating domination characterized the fall of the Roman Empire: the Ostrogoths, Longobards, Normans, Suevians, Angionians and Aragons followed one after another, but none managed to subject the town to feudal rule. After 1800 Ostuni extended its territory by joining the medieval town with its current territory. Recent archaeological finds confirm human settlements around Ostuni from as early as the Paleolithic. In particular, much interest surrounds the well-preserved remains of a woman in labour lying in a large hollow and with a type of hat made out of very small shells. 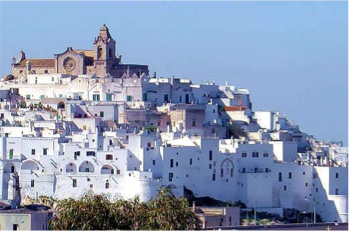 Ostuni’s charm lies in the characteristic white walls of the houses in the old town. Indeed all the houses in the historic centre are only painted using white lime paint. Due to this feature Ostuni is called "the white town", “the queen of the olive groves" and the "city of the crib". The entire old town, known as the “Terra” to distinguish it from the more recent "Marina", is worth a visit. The centre of the old town is crowned by Ostuni Cathedral, in a style difficult to classify, which is however traceable to the Gothic-Romanesque tradition, with Apulia hosting other examples of this architecture. Check out the large door of the Church of Spirito Santo which dates back to 1450 and was originally built for the Church of Ognissanti. It is today recognized as a national monument. Another attraction in Ostuni is the 17-km long coastline that alternates sandy little bays, rocks, pebble beaches and dunes covered in Mediterranean maquis. A huge attraction is the Festival of Sant’Oronzo, the patron saint of the town, which takes place from the 25th to the 27th of August and which also includes the “Cavalcata” in which the municipality authorities and representatives from the clergy parade on horseback alongside of dames and knights in medieval costumes.

This town rises at the junction of three provinces: Bari, Taranto and Brindisi. It is placed in the Itria Valley, on a tableland 410m above sea level at the south-eastern side of Murge dei Trulli. Locorotondo was probably founded by Greek settlers several centuries before Christ. Early sources mentioning a feud named Rotondo date back to the 12th century. Around 1250, this village gradually grew and became a real hamlet subject to St. Stephen monastery. Between the 14th and 15th century, Locorotondo was a property of one of the greatest families of that era, Del Balzo Orsini. During the 16th century the town experienced an economic,
cultural and demographic turmoil. At the end of the 18th century Locorotondo participated in the risings following the ratification of the Roman and Neapolitan Republics.

The Mother church is devoted to St. George and dates back to 17th century. It was built following the destruction of two previous places of worship. The dome was covered with a polychromatic glazed terracotta until 1841, when it was destroyed by a lightning and it was never fixed. Locorotondo has several churches, among which the church of Addolorata, the church of Holy Spirit, St. Nicholas, Annunziata, St. Rocco, Madonna della Catena. Inside the beautiful church of S. Maria della Greca, you can admire a valuable Renaissance polyptyc over the middle altar in memory of the Virgin of Roses as well as a sculptural set portraying St. George riding a horse. During the celebrations for St. Rocco, at midnight on the 16th of August, a very evocative firework competition takes place. Four competing companies usually take part in the event and the winning one repeats its pyrotechnic show at the end of the celebrations, the following night. 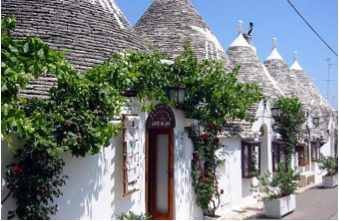 Alberobello is renowned for the iconic Trulli, a traditional stone building, invented in the 15th century to avoid paying taxes to the King. The Trulli, with their distinctive cone-shaped roof, are unique to the Itria valley in Italy and were built using no mortar. In Alberobello you can visit Aia Piccola, a district where about 400 Trulli are concentrated. The homes are still lived in, creating a wonderful atmosphere as you wander the lanes admiring the history of the area and talking to the friendly locals. The beautiful Basilica Minore was built in 1926 by architect Antonio Curri in a neo-classical style, and nearby there is the Trullo Sovrano, a modern Trullo house. Built with two-stores, several fireplaces, kitchen equipment and looms, this house looks like a mansion compared to the much simpler trulli in the area. 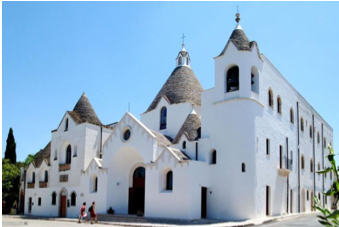 A recommended visit is Casa D'Amore, a UNESCO World Cultural Heritage monument. For over a century the Acquaviva Counts of Conversano wanted all the structures to be built in the classical trullo shape. Casa D’Amore was the first monument in Alberobello to be erected with mortar and without the classical Trullo shape. Rione Monti is the old town center. With more than 1,000 trulli along seven different roads, this is a highly picturesque area. Here you find traditional food and drink to indulge in and many workshop owners showing the production of their handmade articles. Don't miss the church of St. Antonio, set in the heart of Rione Monti. 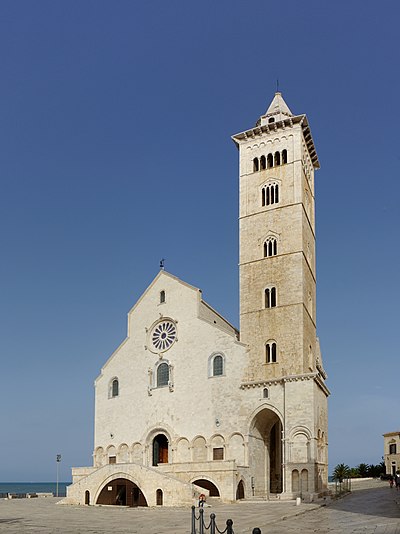 Trani has lost its old city walls and bastions, but the 13th-century fort has been extensively restored as a museum and performance venue and is open to the public. Some of the streets in and around the Ghetto area remain much as they were in the medieval period, and many of the houses display more or less of Norman decoration.

The main church is the Trani Cathedral, dedicated to Saint Nicholas the Pilgrim, a Greek who died in Trani in 1094 while on his way on pilgrimage to Rome, and some years later canonized by Urban II. It lies on a raised open site near the sea, and was consecrated, before its completion, in 1143. It is a basilica with three apses, built in the characteristic white local limestone. It has also a large crypt and a lofty tower, the latter erected in 1230–1239 by the architect whose name appears on the ambo in the cathedral of Bitonto, Nicolaus Sacerdos. It has an arch under it, being supported partly on the side wall of the church, and partly on a massive pillar. The arches of the Romanesque portal are beautifully ornamented, in a manner suggestive of Arab influence; the bronze doors, executed by Barisanus of Trani in 1175, rank among the best of their period in Southern Italy.[10] The capitals of the pillars in the crypt are fine examples of the Romanesque. The interior of the cathedral has been widely modernized,[9] but the crypt remains similar to the origins and was renowned repository of relics, among which indicates the body of the martyr St. Febronia of Nisibis that you can still Today enjoy a precious reliquary of the eighteenth century and an oval painting depicting the Saint at the Diocesan Museum. 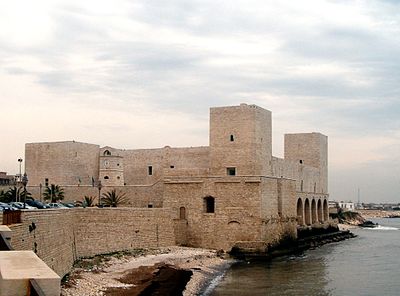 Near the harbor is the Gothic Palace of the Doges of Venice, which is now used as a seminary. The Church of Ognissanti which at one stage was the chapel of a Knights Templar hospital has a Romanesque relief of the Annunciation over the door. San Giacomo and San Francesco also have Romanesque façades; the latter, together with Sant'Andrea, have Byzantine domes. 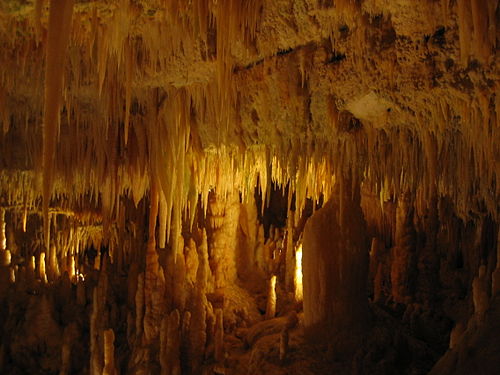 Castellana Grotte is a town and comune in the Metropolitan City of Bari, Apulia, southern Italy. Grotte means "caves" in Italian.

One of the most important attractions in Apulia are the caves of Castellana Grotte, a system of caverns of the karst origin. Stalagmites, stalactites, canyons and caves characterise this pathway long 3 km to more than 60 meters deep. 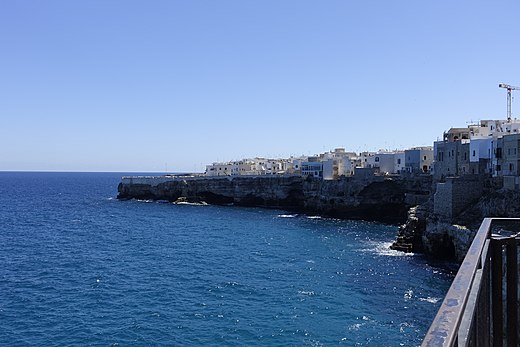 Polignano a mare is a town and comune in the Metropolitan City of Bari, Apulia, southern Italy, located on the Adriatic Sea. The local economy mostly depends on tourism, agriculture and fishing. Its sea caves are of great naturalistic interest and the historical centre and the remains of the Roman domination are historically important. Among the latter, the bridge of the Via Traiana, still walkable today, which crosses Lama Monachile, the deep inlet at North of the historical centre. 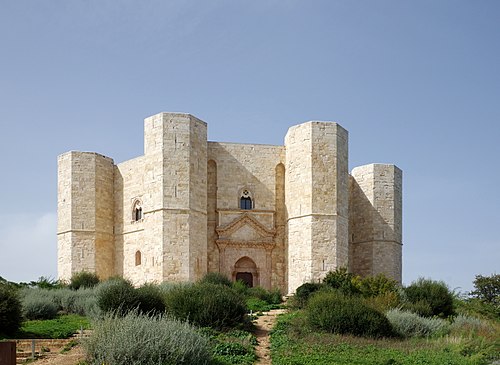 Castel del Monte (Italian for "Castle of the Mountain"; Barese: Castídde d'u Monte) is a 13th-century citadel and castle situated on a hill in Andria in the Apulia region of southeast Italy. It was built during the 1240s by the Emperor Frederick II, who had inherited the lands from his mother Constance of Sicily. In the 18th century, the castle's interior marbles and remaining furnishings were removed. It has neither a moat nor a drawbridge and some considered it never to have been intended as a defensive fortress; however, archaeological work has suggested that it originally had a curtain wall. Described by the Enciclopedia Italiana as "the most fascinating castle built by Frederick II", the site is protected as a World Heritage Site. It also appears on the Italian version of the one cent Euro coin.